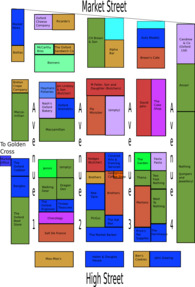 The covered market covers the area between Cornmarket and Turl Street, and Market Street and High Street. The current layout of the market dates from the 18th Century although a market has existed in Oxford since at least the 12th Century. The covered market was created due to a desire to move stalls off the busy streets and into one central area.

It may seem unbelievable that this area once contained over a hundred stalls but originally the shops were much smaller with tiny fronts. Only a few shops remain in the market at the original size.

There are now around 60 shops in the market. There is a mix of food shops (butchers, grocers, delicatessens, etc), places to eat (cafes, sandwich shops, etc), and shops (clothing, shoes, florists, gifts, etc).

A full list of the shops in the market (view them on a map): (unprocessed INDEX_LIST macro)